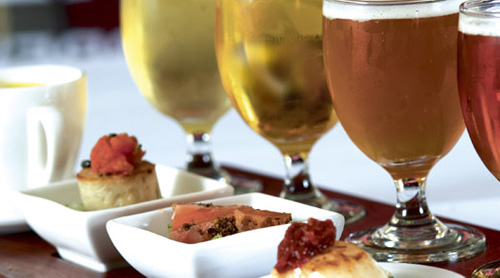 Ok, so I completely realize that normally when one is drinking, food is an after thought to soak some of it up.  I mean nothing goes together with downing a few beers at the bar like soaking it all up with some greasy stuff straight out of the kitchen.  Though what if, now stay with me here, what if there was a better way than just getting drunk and ordering the appetizer sampler?

This may sound crazy but pairing food with booze isn’t just for wine snobs.  Turns out that drinking beer and eating food can be molded into one crazy good experience.  When you think about it, well, it sounds right huh?  Clearly with the proliferation of micro-brews and the availability of a plethora of beer choices to the average consumer it only seems natural that eventually some of us would start to notice that certain beers just taste that much better with a certain food joining the party.

Anyhow, those beer engineers over at Monarch Beverage have done us all a solid and created a nice little reference for when we want to take our beer selection to the next level.  They have given both general and specific recommendations based on what beer you have or what food you plan on eating.   Give them a look.   Get the whole reference here and don’t forget to bookmark it for later.