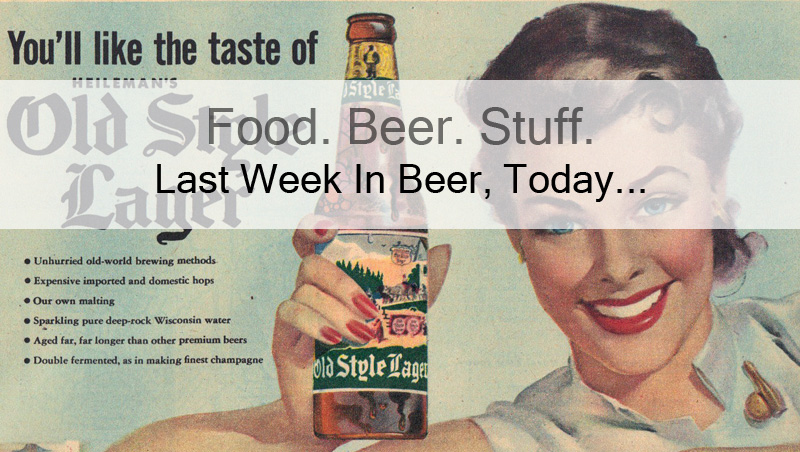 Hello and welcome to the first edition of Last Week In Beer, Today… The new semi-weekly (or whatever) informal beer news round-up where we take a look back on whats been happening. So what news is on tap last week today, huh?

Could a Colorado craft brewery sell out to big beer?
While Jordan said she is not happy about the pending Elysian sale, she is also stunned by the viciousness of the reaction. Selling out is seen as the end goal for most startup industries — consider high-tech — but not so in craft beer.

“I find myself wanting to remind people this is beer,” Jordan said. “We are not solving big-world problems.”

Flint’s only brewery, Tenacity Brewing, opens for beer fans
Head brewer Jeff Rasmussen has been tweaking beer recipes for about eight months. After having six beers on tap for opening weekend, Caya and Van De Winkle said they’re adding another beer this weekend. The production rate so far is four to five barrels a week, Caya said, with plans to increase as demand builds.

They’re working on more recipes to fill the rest of the taps–out of 13 taps, one will always be for soda, and another will eventually be used for cider. Favorites so far have been a Milk Stout, described as a “delicious treat” with “sweet but balanced with roasted malts, creamy mouth feel” on the menu, and IPA, described as “honey and citrus aroma; well balanced malt flavor; brewed with local honey.”

17 Of The Most Sought-After Craft Beers In America, And How To Find Them
For a certain type of craft beer geek (hop-loving, competitive and possibly residing in California), this time of year means one thing: Pliny the Younger. The legendary Russian River Brewing Co. releases its most acclaimed beer — a more intense version of its flagship Pliny the Elder — at the beginning of every February. And every year, thousands of aficionados drive to Santa Rosa, California, to wait in line for hours to get a taste of what they consider to be one of the finest IPAs on the planet.

That sounds a little crazy. And it is. But it’s not unique. In fact, well over a dozen limited-edition American craft beers attract similar levels of devotion. All of these beers make regular appearances on lists of the best beers in America. So they’re delicious, without a doubt.

All materials used, including the cap, will be developed using bio-based and biodegradable materials – primarily sustainably sourced wood-fibers – allowing the bottle to be responsibly degraded, Carlsberg said.

Unlike bottles, the containers wouldn’t be clear and would be soft to the touch, bringing serious implications for those who like a hearty clink when toasting.

Old Heavy Seas Beer tanks will soon be used to make brandy and whiskey
At the heart of that operation will be tanks from Baltimore’s Heavy Seas Beer. Tate bought Heavy Seas’ three old brewhouse tanks, as well as a hot liquor tank, which holds hot water, and a lagering tank.

Republicans renew quest to put beer, wine and liquor under one roof
Almost two years ago, the Pennsylvania House made history when it passed legislation that would privatize Pennsylvania’s wine and spirits stores, relics of the Prohibition era that forced residents to buy booze from the government.

State Rep. Mike Turzai, the Republican floor leader at the time, said then the passage of his privatization bill “sent the message that it’s time to put an end to the dinosaur of bureaucracy that is the Pennsylvania state store.”

The Senate, though, never passed the bill, meaning no legislative meteor ever arrived to snuff out the state’s monopoly on wine and liquor sales. The bill died at the end of the previous legislative session.

Craft beer drinkers just love their IPAs
The hop-heavy, high-alcohol brew has grown at a faster pace than the ever-expanding U.S. craft beer market. IPA sales in the 52 weeks ended Jan. 25 jumped nearly 50 percent from the previous year, according to IRI, a Chicago-based market research firm. The wider craft segment rose about 20 percent.

IPAs accounted for about a quarter of craft sales in that span. Fervor for the hop-heavy ale shows no signs of slowing