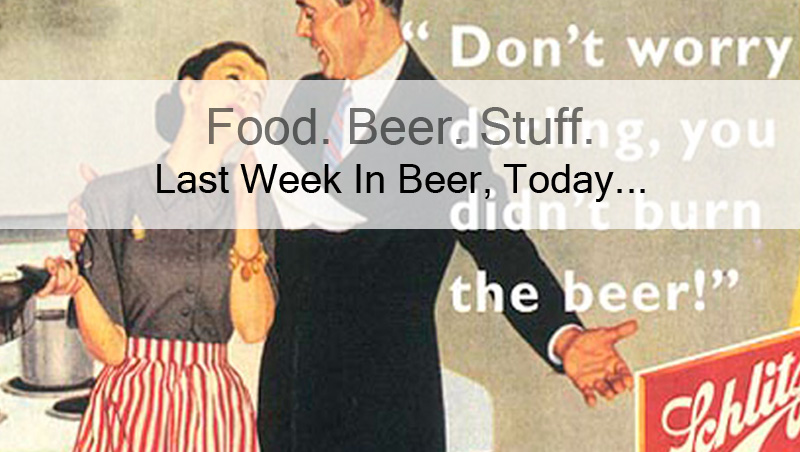 This weeks old beer ad courtesy of Schlitz Brewing. Remember, it was a different time…

Hello and welcome to the latest edition of Last Week In Beer, Today. This is where I take a look at the last week in beer and try to tell you everything that was worth noting. This week we have new beers, craft beer farmers getting rich soon, this bud is not for you, an angry aussie proving that if your opinion is researched poorly enough, the whole wold might take notice and even more! Wowie Zowie! lets get too it then…

Tapped In: Craft beer — A farmer’s salvation?
Brewer demand for hops and barley is skyrocketing, but there’s room to grow. Craft brewers aren’t just changing the beer industry, they’re having a noticeable impact on the nation’s farmers as well …In 2005, the average price per pound in the U.S. was $1.94. Last year it was $3.83 (a 14% jump over the 2013 average price)…

311 Launching Own Craft Beer & Of Course It’s An Amber Ale
The Omaha band has teamed up Rock Brothers in Tampa, Fla., and Nebraska Brewing in Papillion, Neb., bassist Aaron “P Nut” Wills confirmed in a tweet today while on their 311 Cruise Through the Caribbean.

New Collaboration Beer From DC Brau and Oskar Blues
We are extremely excited to announce our latest collaboration will be hitting the DC market later this month. For the past year, we have been talking with our friends from Oskar Blues Brewery in Colorado about working on a collaboration, and the results from this past November’s election here in DC gave us the perfect inspiration to brew a great beer with good friends to further underscore our support of DC Home Rule.

Budweiser losing the battle with craft beers
“We do not expect to stabilize Bud in the US in the short term,” Chief Financial Officer Felipe Dutra told reporters. “We have been repositioning the brand and making it more relevant for younger adults, but it’s not an easy task.”
Bud’s US market share fell to 8.7 percent in 2013, down from 14.3 percent in 2005…

(Angry Aussie) Give me cheap beer, or give me sobriety. Just stop this craft beer ‘revolution’
Is the craft beer “revolution” over yet? For the past four or five years I’ve been plaintively asking this question in the same tone as a toddler in the back seat. Now it seems that every time I head to the pub I’m confronted by a row of hand-whittled taps. My pleas are becoming more desperate…

Craft brewers may need to be careful what they ask for…
But what about the more complex and nuanced idea of the ability to open – almost without restrictions – retail outlets? If the wish of the craft beer advocates were to become law, then brewers (of all shapes and sizes) would be selling direct to the public, opening corner pubs in competition with local craft brewers, local distributors and local retailers. Sounds like beer heaven to me; except it may not be quite that simple…

Craft Beer Is Booming But Brewers See Crossroads
Last July, with a stake of at least 40 percent in the business, he sensed it was the moment to make another move. He asked his partners to bring in an investor so the brewery could buy faltering competitors. And when they declined, he cashed out. His decision reflects one side of the differing views within the industry about the direction the booming sector will take.