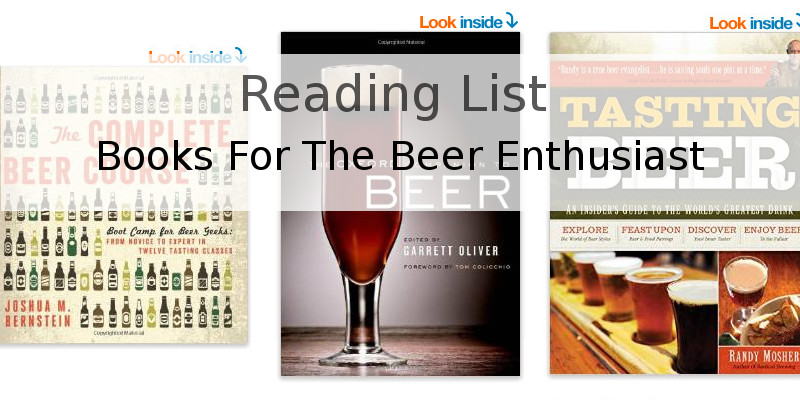 Over the last decade or so, my interest in beer has steadily grown from just a liquid that made me happy to a real passion. I found myself wanting to learn all I could about the history, culture, science and people that have made the beer scene what it is today. Obviously, one of the best ways to get up to speed is with a book. I haven’t had a chance to read all of the ones I want to yet, but I hope to get to more of the books on my Reading List soon. Below you will find the best selling, most informative and most interesting books for the beer enthusiast, sure to educate and inform the novice and experienced alike.

I wanted to begin this list with one of my favorite reads on the subject, Tasting Beer: An Insider’s Guide to the World’s Greatest Drink

An essential read for anybody who wants to learn the finer points of beer tasting Randy goes beyond that complicated scope to also explore the extensive history of brewing, the many styles of beer (with commercially available examples), judging guidelines, industry vocabulary and food pairing among other topics.

to not only be extremely informative but highly entertaining. Randy has a lightness and voice to his writing that while respecting the craft doesn’t get too preachy rather encouraging the reader to build their own opinions based on a proper backbone of education.

When I was first getting serious about beer, this was my go to publication and over the years I still find myself referencing it on occasion. I consider Tasting Beer to be an essential read for anyone who finds themselves wanting to have a greater understanding and appreciation for beer.

is a title I plan on reading very soon. Sour Beers, being a style I have not had much exposure to are steadily finding an audience as craft brewing gains more prominence. Michael Tonsmeire is also known as “The Mad Fermentationist” and aside from writing American Sour Beers has been sharing his recipes and thoughts on sour beer at www.themadfermentationist.com since 2007.

If one wants to learn more about sour beer or begin experimenting with sour brews of their own this is the authoritative book on the subject. Michael first gives an in depth introduction to sours followed by instruction through each step of the brewing process describing in detail how the process works and how the tastes are affected. The book ends with his own recipes and ideas and thoughts on where the reader can go with experimenting with some Sour Beers of their own.

Though this book could be quite educational for the novice brewer, it is best suited to those who have been brewing for quite some time as with sour beers much can go wrong, even for the experts.

The Oxford Companion To Beer

For Those not familiar with The Oxford Companion Series

of books, the idea is to take a subject and provide general knowledge for that specific topic in A-Z fashion for easy reference. The Oxford Companion to Beer

I got a chance to thumb through this a bit Friday night and I found it to be quite informative. As a reference, the style does not lend itself well to reading from cover to cover obviously but the shear number of topics covered is outstanding. I have not come across anything else that packs this much beer knowledge.

You can read and reference the topics from A-Z as mentioned but luckily, The Oxford Companion to Beer also offers a topical index where the entries are grouped together by different topics such as breweries, hops, malts, yeast, chemistry, beer styles, festivals, history, and seriously hundreds more topics.

I found the reference to be comprehensive on all subjects included though perhaps not all-encompassing on any one topic, working as a very thorough primer. I actually just ordered this myself and look forward to getting a chance to read through it a bit more.