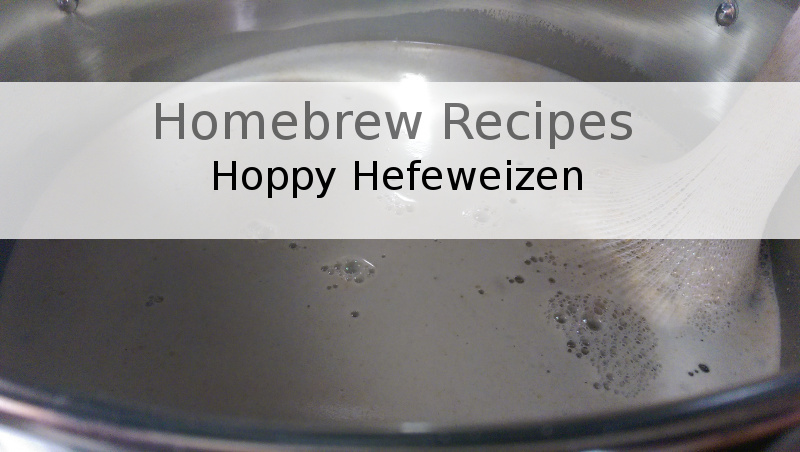 Last Saturday was a brew day for me and this time around I wanted to experiment a bit with an idea that’s been floating around in my brain for awhile.

Hefeweizen, being one of my favorite beer styles has been a frequent guest in my fermenter over the years and I usually just do my best to brew to tradition. Among other things, this means little hops in the boil and using the correct yeast strain.

What I have been thinking of lately though is to make an aggressively hopped (relatively speaking) Hefeweizen. This is something that is usually frowned upon when it comes to a hefeweizen because the flavor profile of the style calls for the yeast esters and phenolics to take center stage and going hop forward could possibly wash those flavors out. For this reason, when making this hoppy hefeweizen my hop schedule and selection was going to be very important.

With this Hefe, I plan on balancing towards the banana esters over the more clove like phenolics so with my hops I wanted to go with varieties that had more of a citrus & fruity profile. I decided on using Ahtanum and Amarillo. Amarillo is well known for adding grapefruit and orange notes due to its high level of myrcene oils, Ahtanum also contains a large amount of myrcene oils but with a lower level of alpha acid, making it a nice swap out for the traditional low alpha acid noble hop varieties that brewing a traditional hefeweizen would call for.

A normal Hefeweizen recipe takes about 2/3 oz of bittering hops of about 4% AA to be thrown in the boil for around 60 minutes for a five gallon batch. To bitter this batch up a bit more, I went with 2oz of 4% AA Ahtanum for the 60 minute boil hopefully giving this batch a more noticeable bittering without going too crazy with it. For my Amarillo hops (sitting at a much higher 10% AA) I added 1oz 45 minutes into the boil and 1oz at flame off. Doing this will give me the nice flavors and aroma of the Amarillo hops without getting the bittering from the higher AA%.

For yeast, I went with the traditional 3068, ensuring that I can get the right esters while fermenting. To get that banana in the brew, I slightly under-pitched and will be keeping my fermentation temperature towards the mid to lower 70’s (F) Ambient 68(F).

This recipe calls for fresh grains, utilizing 1lbs of flaked wheat and 8oz of flaked oats steeped before the boil. The rest of the wort consist of 5 lbs of wheat liquid malt extract. Once I have gotten a chance to taste this beer, I’ll give the post a nice update so be sure to bookmark this page or subscribe to see how this all turns out.

When making a hefeweizen with 3068 yeast the two items you want to pay attention to are yeast pitch rate and fermentation temperature. Under pitching the yeast will bring out more of the esters while over pitching will more or less remove the esters leaving more phenolics. Temperature should be 65F – 75F with the higher tempretures favoring ester production and the lower temperatures favoring phenolics. This can be a sulfur high yeast so be sure to condition to avoid off scents. 3068 is an aggressive yeast so be sure to leave a minimum of 35% head-space.

Warning: count(): Parameter must be an array or an object that implements Countable in /homepages/20/d161977859/htdocs/2013_FoodBeerStuff/wp-includes/class-wp-comment-query.php on line 405
2 Comments